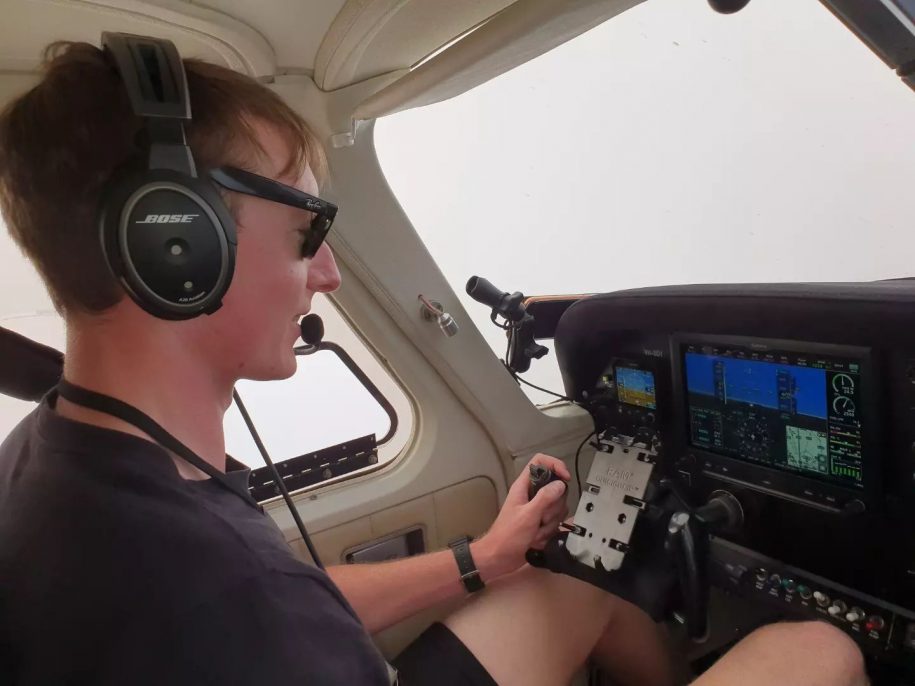 Corey Hawkins remembers the look on the flight instructor’s face as he closed the door and walked away from the plane – leaving Corey to pilot his first ever solo flight.

“He looked so happy, like it was a big achievement,” Corey says with a grin. And it was that look which stuck with Corey through his commercial pilot licence training in Melbourne, to the point where he knew he would one day be a flight instructor. “I wanted to experience that for myself. I wanted to help someone get from that very first lesson to that point and beyond, and to apply their learning in the real world.”

And now, three years later, Corey is doing exactly that. In his first year as a flight instructor, Corey has advanced through the ranks as a Grade Three and a Grade Two flight instructor, and is about to become a Grade One flight instructor in early 2023. Corey works with Sureflight Australia and sister company Wagga Air Centre in Albury, Victoria. The company specialises in flight training and air transport, operating a diverse fleet of aircraft from a Cessna 150 through to Fairchild Metroliner turboprops.

“I’m mainly in a training role at the moment, but soon to move into charter and high-performance operations once I get some more hours behind me,” Corey says. “When I left Par Avion, I had around 250 hours. Now, I’ve got just under 1,000 flight hours.”

He’s clearly excited at how his aviation career is unfolding, but teaching others is still his main driver. “It’s been really fulfilling,” he says. “I’ve worked with a diverse range of people from fourteen years of age right up to seventy – all sorts of people who want to learn to fly. I’ve sent many people on their first solos now.”

Teaching student pilots from their very first effects-of-controls lesson, through to their first solo, and then onwards to their licence is clearly what gets Corey out of bed each morning. “The amount of work you put into someone, to see the product at the end – and a high quality one at that, is really fulfilling for me.”

Yet it all seems such a long way from when Corey used to look to the sky as a young boy in Zeehan on Tasmania’s remote west coast. “I used to see the contrails of the jets flying over sometimes, and I was always fascinated to see where they were going.”

Corey was fifteen years old when he started to plan for a career in aviation. After getting his commercial pilot licence, he looked for a quality flight instructor course. “I did some research into Par Avion Flight Training and saw that the instructors there also conduct commercial flying operations. For real world experience, you can’t get better than that. I reached out to a few people who’d completed the course, and they said it’s a very through course and you’ll never be surprised when you get out there in the real world as an instructor.”

And looking back now, Corey is confident he made the right choice. “Everything I learned during my time at Par Avion, I’m now using, and I’ve never been surprised in the role. I’ve been able to make good decisions as a flight instructor and get my students to where they need to be. And the learning there is in smaller classes, so you have plenty of one-on-one time to learn from the instructors.”

For Corey, the quality of the training in the Diploma of Aviation – Flight Instructor course helped him land his first job, and prepare him to operate as a flight instructor. “The instructors there set me up really well. I needed to be top-tier with my flying and my briefings, and those skills really helped me land my first job. Teaching skills such as good questioning and how to assess someone … I’m using those every day at work.”

Corey is enthusiastic about other commercial pilots becoming flight instructors. His advice: “Make sure you’re actually interested in teaching and helping people to learn. Then, go for it! It will improve your skills a whole lot more, and you’ll meet and help so many people. It’s an awesome career path to take.”

The look of fulfillment and joy is clear on Corey’s face is clear as he talks about his aviation career and his passion to teach others. And, no doubt, Corey has that same look every time he closes that door, walks away from the plane, and sends-off yet another student pilot on their first solo flight.